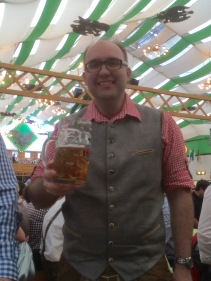 It is now a bit over 20 years since I went to Germany with SAGSE. As a 16 year-old who had never left Australia, the exchange opened up a new world for me and was a key experience in my life. The opportunity to experience Germany “from the inside” for six weeks gave me language skills and cultural understanding that would be difficult to achieve in six months of independent travel. I returned with a good amount of fluency in German (something I would never have thought could be achieved in such a short time) and can still clearly remember many experiences from that time. My host family invested a huge amount of effort in advancing my German language ability and ensuring that I was well introduced to German history and culture (with trips to concerts and the opera as well as Erfurt, Weimar and Berlin) as well as life in Germany generally. They have remained close friends ever since – we are in regular contact, they came to my wedding and I also went to my host brother’s.

nternational law firm in Frankfurt for more than 5 years. I’m now settled in London working as a lawyer for a Swiss investment bank – speaking and working in German (although sometimes the Swiss variety) remains part of daily life. I remain a frequent visitor to the German-speaking world both for work and pleasure. There is always something to draw me back – Christmas markets, skiing in winter, the Austrian lakes in summer and Oktoberfest in Autumn.

Much has changed since 1993, but the format of the SAGSE exchange is largely the same today. I have accompanied a number of SAGSE groups in Germany over the years. Communication with home and around the world is much easier in the era of smartphones and internet, particularly compared with my time on exchange when communication home was by letter and a weekly five minute phone call. The reaction of SAGSE students to their time in Germany remains very much the same – it is an unforgettable experience.

You may wish to reply Cancel reply